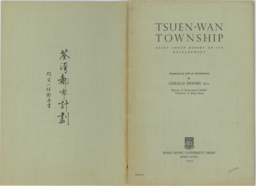 Today, HKU SPACE runs many symposiums and seminars which people attend almost without thinking as simply one other element in a rich panoply of study opportunities. But it wasn’t always like that. Symposiums or study groups as we called them in the old days were somewhat experimental in nature. And the topics chosen for this form of study mostly reflected the development of society at that time.

The DEMS held its first ever “seminar” in 1959 in what was described at the time as a bilingual Study Group on the Development of the Tsuen Wan Township. Attendees included the Chairman of the Rural Committee, Village Representatives, farmers, landowners, mill managers and head-masters.

The Director of Extra-Mural Studies acted as Chairman assisted by Mr Robert Ting (Headmaster of the Tsuen Wan Government School) as interpreter. A team of lecturers visited Tsuen Wan to address the group on the history, geology and topography, economic growth and physical development of Tsuen Wan, as a background to some final lectures on the engineering and architectural problems of developing the new town. A report on this “Seminar” Study Group was published by the University Press in September 1959.

The result of this successful experiment led to more seminars and symposiums being held in specialist areas and industries such as aviation and textiles, fabric design, public relations. These continue to the present day.