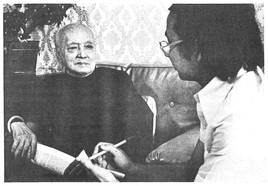 In Sept 1978, Mr Lo In-nin, a former student of the Department of Extra-Mural Studies (DEMS), was interviewed by a reporter from the HKU publication “Interflow”. Mr Lo had enrolled in the DEMS course on Journalism at the age of 86 in 1974, and completed the course in 1975.

Mr Lo was one of the most diligent students as he attended the lectures ‘not for any practical purpose, but rather for his personal interest’.

When Mr Lo was interviewed, he was already 90 years old and had 65 grandchildren. He had a wide range of interests and great curiosity. Journalism was just one of his interests. He attributed his good health to always: ‘Be cheerful and kind, and don't drink or smoke’.

Mr Lo’s didn't look his 90 years. His eyes were sharp and spirited, proving that age is not a reason for you to stop learning. Instead, once you are freed from the daily stress of work, you can choose what you want to learn, and live a more fruitful life.